Z RE DRAWING THE ECONOMY 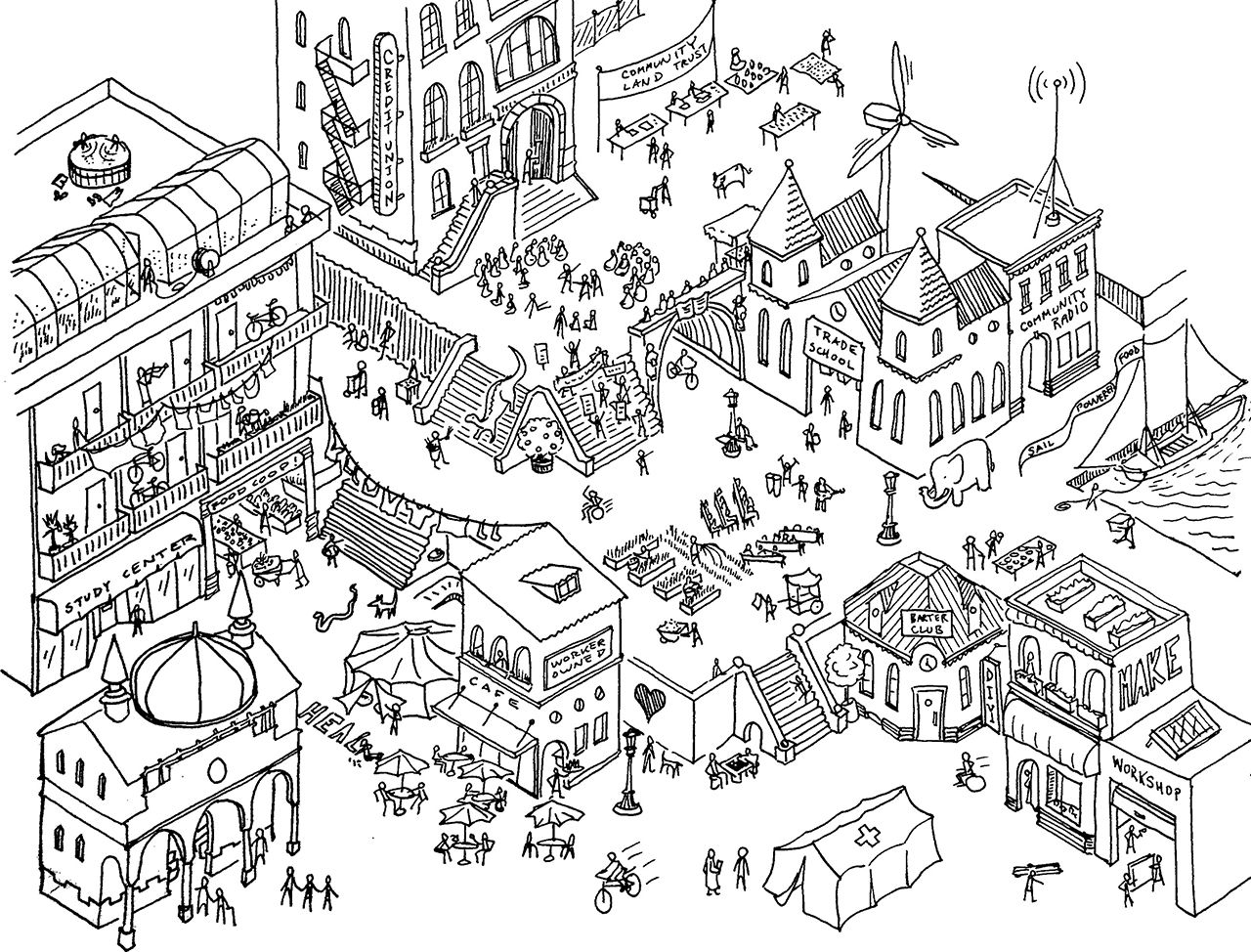 From 2016 - 2017, Caroline Woolard will be working with Stephen Healy, Katherine Gibson, and the Community Economies Research Network to come up with new images that might communicate key ideas from Take Back the Economy, a book that combines practices from popular education and academic research.

As stated by Stephen Healy and Katherine Gibson:

Founded in the 1990's by Professor Gibson and her colleague, the late Professor Julie Graham (University of Massachusetts Amherst), the Community Economies Collective (CEC) grew out of Gibson-Graham's feminist critique of political economy that focused upon the limiting effects of representing economies as dominantly capitalist. This network of researchers later expanded to become a wider collaboration, the interdisciplinary Community Economies Research Network (CERN), including students, academics, policy makers, community researchers and activists around the world.

Community economies research helps people to understand the contributions they make to an economy via diverse economic practices that are not often recognised, documented or even valued. It recasts the economy as a site where democratic deliberations and collective actions take place in formal and informal settings, involving market and non-market exchanges and various forms of labour, enterprise and place making activities. This reframing is laid out in Take Back the Economy: An Ethical Guide for Transforming our Communities[Opens in a new window] (2013, University of Minnesota Press), a book written for a popular audience by J.K. Gibson-Graham, Jenny Cameron and Stephen Healy.

Using 'action research' methods that involve community members as researchers, community economies research aims to initiate change leading to social transformation. The impact of this research is experienced alongside the formation of alternative livelihoods such as community enterprises.

While Professor Gibson and Dr Healy have focused their engaged research in the US, Australia and the Asia-Pacific region – including the Philippines, Hong Kong, the Solomon Islands and Papua New Guinea, the reach of this research approach has been extended considerably through the creation of the CERN with its international membership of over 130 members. The network's collaborative relations recently culminated in the award of a Scholar-Activist Antipode Foundation Grant "Re-drawing the economy: creating place-based images that can travel" to work with artists, community members and local translators of Take Back the Economy in Colombia, South Korea and Finland.

In association with the larger CERN network Professor Gibson and Dr Healy have had international impact in three key areas: regional economic development, education, and broadening the field of economic representation.

From Universities in North America using Take Back the Economy in their courses, to artists in the UK, Denmark, France, Spain, Sweden, Ireland, New York and Australia utilising the work of the CERN in art installations and exhibition catalogues, and through the shaping of national and international conversations, impact of the research has been vast. Direct impact is evident in the following examples:

Community based organisations, municipalities and non-governmental organisations (e.g. the Philippines-based Unlad Kayban Migrant Services Foundation Inc.) are undertaking cooperative and community economy based approaches to development
The action research method has been introduced into the work of the National Anti-Poverty Commission in the Philippines
Development practice in US cities and regions has been explicitly influenced by work of community economies scholars (e.g. fostering anchor-institution led cooperative development in Worcester and Springfield Massachusetts, community supported fisheries in New England coastal fishing communities and integrating fisher communities into national level resource management strategies)
Local economic and ecological resilience projects in Australia are using the community economies approach (e.g. to develop social enterprise and a worker owned cooperative in the Latrobe Valley, Victoria; to mobilize citizens to help cool the commons in Western Sydney, NSW).

New approaches to economic development and social transformation have generated jobs in the social economy while a more expansive conception of economy allows larger numbers of people to consider what constitutes effective development.

With the present moment in time being defined by common economic, social and ecological crises, this initiative aims to come up with transformative solutions to current problems while leveraging the international community economies network for rapid dissemination. By appreciating that economies are always diverse and always in the process of becoming, and by making multiple forms of economic life viable options for action, engaged scholarly and activist efforts aim to open the economy to ethical debate and provide a space within which to explore different economic practices and pathways.